This method of Benjamin and Quinn uses a model of tiling a row of squares with stackable tiles and (non-stackable) dominoes. For example, in the diagram below, the first square may be tiled with 1-3 square tiles, or a domino may be placed on the first 2 squares. The second square may be tiled with 1-7 squares, or by using a domino on squares 0 & 1 or 1 & 2.
++++So, just tiling the first two squares, without dominoes there are

ways of stacking squares; using a domino, there’s one way. There are 7 ways of tiling the second square alone – by using 1-7 tiles.
So we have: ++++ 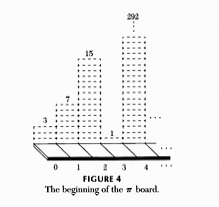 ways.
So adding these:

ways. This gets the numerator of the fraction. To obtain the denominator, we remove the first square, leaving 7, 15, 1.
There are 3 possibilities re the placement of the domino:
++++• no domino.

7 ways
So the total is

, and the continued fraction is

Why it works. For positive numbers

since the first term counts tilings ending with a stack of tiles, and the second counts those ending with a domino. So for nonnegative

, while the second part counts those that do.++Also,

can be represented by a similar model, by using stackable dominoes also.
e.g.

ways.
So the sought fraction is