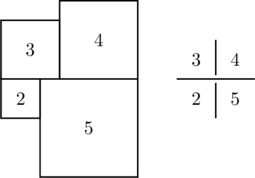 Mostly here we will be working with an adjacent h-line and v-line:

which I’ll call an hv-line, where

can usually be left off the notation.

To draw a tiling from this, extend the grid as far as needed, and fill in the blanks by extending the sequences, and completing h- and v-lines, then draw the squares. Negative and zero-sized squares fit without a problem.
(see page on how to do that)

It seems that every tiling wraps around the plane twice – they are all double tilings – but only some have the same squares in the same positions in both layers.
Q. WHY????
The purpose of this study is to investigate and enumerate which of these 2-layer tilings have both layers the same, and thus can easily be drawn as tilings.
(Im not sure if some or all of the different-layered ones have layers containing a coincident seam, so the layers can be separated and drawn separately.)
*** tiling a different thing from the grid – every grid works fine, but only some tilings are same-layered.
conjecture: it’s when c=-f (in canonical form with d=0)
i.e. a+b=-(b-e)
b=(e-a)/2
i.e. (sticking with integers only) only when
e-a is even: a,e are both odd or both even.
[pic of centre of 8 1 | 10]
9 0 | -9
In the resulting tiling, 9 square is in the same place as the -9 square, and thus only when b=1 is it single-layered.
Q. when b=1+/-164n (i.e. multiples of A^2+B^2) what happens? Its on same map, but then c<>f.. It’s not the centre? hmm…. draw what happens.

Moving around the grid

Taking for a concrete example:

[-A -B]
[-B -A]
Moving horizontally or vertically, or to any other h-line in the tiling, can be produced by a combination of these elementary operations.
e.g. horizontally to the right = Move SE+Move SW

Q. For any A and B, which b produces a single tiling? (both layers the same)

Q. So, what is the canonical form for the P. packings?
and
Q. Which of them are single-layered?